I just read this article, Six Keys to Effective Digital Leadership, and must say that effective digital leadership, or any leadership for that matter, is not that hard.  It's really about the mission and goals of your educational institution, sticking by these goals, and believing in what you do.  Naturally, communication and buy-in from stakeholders is EXTREMELY important.
The article referenced Eric Sheninger, a high school principal in New Jersey.  His first quote, hit me right away, "If the leaders don't get it, it's not going to happen.  Yet the people in charge of leading schools in the 21st century often are the least knowledgeable about the 21st century."  Tell me that doesn't strike a chord....

According to Sheninger, the six keys are:

I think Sheninger summed it up best when he stated, "Pedagogy is the driver, while technology is the accelerator.  Technology is simply a tool and not a learning outcome by itself..... the real outcomes you should be looking for are the things like finding answers, creating products, taking action, changing peoples' minds, and making a difference in the world."

Earlier today, I received an email from a teacher, asking that we add more behavior codes to our student information system to reflect electronic device violations, because according to her, "they are out of control."  This relates directly to Sheninger's article - and #2 --> GIVE UP CONTROL.  If teachers model effective use of devices, they become a powerful learning tool; providing students with autonomy and personalized learning opportunities, while using devices or not, helps (#4) build relationships and break down silos.  Also, isn't doing so (#5) working smarter, not harder?

We are dealing with a generation of students who do not know life without the internet.  More information is available now than ever before.  As educators, we need to learn about this and teach students how to navigate it correctly and meaningfully.

This takes me back to mission, goals, and core beliefs.  Anything is possible.  It really comes down to how badly you want to make it happen.

Posted by Unknown at 9:01 AM No comments:

Scariest Election of My Lifetime

As I've watched the Presidential election primary season over the past several months, I have repeatedly said to myself, "This is the scariest election of my lifetime."  I don't consider myself to be a political person, however I have become increasingly more political, as I feel this is the most important election in my lifetime, not to mention our nation's history.

I just read a very powerful piece - An Open Letter To My Children About Donald Trump.  Please take the seven minutes to read this.


"One final thing to remember my children is that we must never hate the people who are becoming Donald Trump. We must remember that they have names and that they have stories of their own. And that perhaps the reason that they are becoming Donald Trump is because of their stories. Perhaps they are afraid that people will come and take what is theirs, or what they believe is theirs. And we must remember that no matter if it is true or not, that is a very scary thought indeed. And perhaps if we can listen and we can hear the people who are becoming Donald Trump we can learn something for ourselves and we can learn something about the place where you live and are growing. Something that will make our world bigger. And this place better. And perhaps, if these people have not yet fully become Donald Trump, they may be able to hear us and read this letter and they might know, like you now know, why I do not want you to become Donald Trump."

In a sense, it reminds me of a book I read by Lee Iacocca some years ago titled Where Have All The Leaders Gone.  Iacocca somewhat attached George W. Bush's cavalier attitude towards muslims and terrorists - "Bring it on."  This is not what our country was founded on; it is not what we are about.  As Americans, aren't we supposed to be above that?

We have all heard the saying, "Those who don't learn from history are doomed to repeat it."  How true this statement is; it reminds me of a lesson from my 11th grade US History teacher, Rod Liner.  Rod actually knew somebody (Ron Jones) from his teaching credential program at Stanford during the 60's.  Jones went to work at Cubberley High School in Palo Alto (now closed) - when he was teaching World History, his students could not understand how the average German followed Hitler and the Nazi regime.  So Jones tried an experiment - essentially he created his own version of Fascism - using propaganda and other techniques used by the Third Reich.  And guess what?  Much like many Nazi's, students who were "indoctrinated" tried to deny their history.   The experiment, though frowned upon at the time by many, created quite a stir - a book, a movie, and a stage play / movement in Germany, among other countries.  The lesson made its point - "Fascism isn't something those other people did; it's something in all of us.  If we aren't careful, we can repeat history."  Ron Jones is still a forward-thinking educator who impacts the lives of many (I have never met him, but we are connected on Facebook and have common friends.)

Have you ever seen the film, The American President?  Michael Douglas played the President - a bachelor running for re-election who began a relationship with Annette Bening - and the press, as well as his opponent, were all over him.   The film was a bit corny, but made a strong point. As American living in a democratic society, we have many rights and points of view.  We have to find a way to understand each other and tolerate each other, even if there are opposing viewpoints.  This is far easier said than done, but it is possible through education, patience, and LISTENING.

The rhetoric spewing from Donald Trump's mouth is offensive and disgusting.  We couldn't have a worse person represent us as our President.  As the "Open Letter" states, we need to learn about each other - why many of the Trump supporters are so frustrated and disenfranchised.  Building walls and "bombing the shit" out of countries is not the answer.  Singling out a specific race or ethnicity is not the answer.  Look where that got Nazi Germany.  America is huge; there are complex issues that need to be worked on and resolved.  Right now, much of the governing we experience is about special interests and flat-out discrimination (yes, I'm referring to the way Congress has treated Obama - who very well can go down as the best President ever.)

This is the scariest election of my lifetime, but I'm going to VOTE.  I encourage everybody to vote - it is our right, but more importantly, our obligation.  Remember:  If you aren't part of the solution, you are part of the problem.  And the challenges we are having are not going to go away on their own.

Posted by Unknown at 3:54 PM No comments: 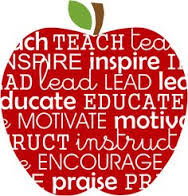 Here it is, the week we've all been waiting for, right?  Teacher Appreciation Week!  It's often been noted that teaching is the most under rated and unappreciated job out there - I somewhat agree.  But how many of us are paid for what we are truly worth?

We've seen the inspiring stories about "what do you make," when educators can say "We make a difference in children's lives, what do you make?"  The harsh reality about teaching is that this profession will never receive the recognition and compensation it deserves  - it is impossible to put a price tag on what we do every day to help shape the future, despite the ever growing obstacles we face.

Time magazine has a piece out right now titled What Makes A Great Teacher.  Fair enough question, as each of us probably has our own definition.  Sometimes the "popular" teacher is defined as great - but that is a whole other mountain to climb.  Recently my nephew told me his Government teacher was "chill" because he didn't give homework, gave extra credit for kids who did the required work, and showed a lot of films in class.  I am not judging a person I do not know, but given the criteria I just listed, that is NOT a great teacher.  In my opinion, a great teacher is one who is organized, consistent, rigorous, continually has high expectations of ALL students, and inspires greatness.    Any teacher can be nice - allow kids to eat in class, turn in work late, etc.  But the teacher who demonstrates consistency and what I call "tough love" is the one who the kids will remember for the right reasons - the one who prepares them for the next stage of their life.  Teaches lessons beyond the curriculum - teaches students about LIFE.

Like any profession, education has its share of individuals who simply do not belong working with children.  "Moving" these individuals along takes time, courage, and conviction.  It is a necessary evil in any profession.

The great teachers I have had along the way - (Rod Liner, John Ertola, Ken Ball, Mike Radoye, Diane Hooper, Wilma Hoffmann, and so many others) - have taught me more than the required curriculum.  They taught me about life - about humanity - about making this world a better place.  Treat others as you want to be treated.  Never judge a book by its cover.  Find meaning in all you do.  Look for the best in others.  Know that you aren't entering the teaching profession for fortune or fame - but to simply do what you love to do and make a difference in the lives of our youth.  Here's to all of the great teachers out there - you should be appreciated EVERY week, but especially this week.  Thank you for your sacrifices and the differences you make.
Posted by Unknown at 12:50 PM No comments: