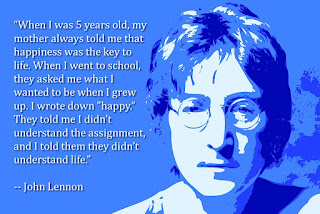 Today marks the 35th anniversary of the death of John Lennon.  I was only nine when he was murdered and at the time, did not understand the impact his music, his views, and his overall character had on our world.

I remember my mom was really upset.  I also remember thinking to myself, "Who is John Lennon?  A beatle?  Insect?  What?"

The more I've learned about John Lennon, the more I realize that he just "got it."  Yeah, plenty of people thought he was a weird hippy, but he had a down to earth point of view; he was a pacifist who truly wanted to "Give Peace a Chance."

John knew what it meant to express yourself without regret; live each day to its fullest and impact the world through positive action and contributions to the arts.  I think back to Apple's "Think Different" campaign and the individuals that Steve Jobs chose as "the crazy ones, the misfits, the outcasts."  John was one of them - his ideas were big enough to change the world and he did just that. 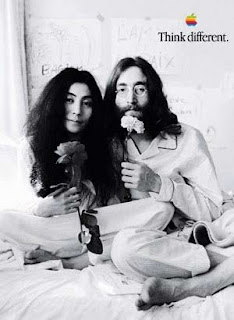 There will never be another John Lennon.  There will never be another band (in my opinion) that has an impact on the world like the Beatles.  But in our attempt to understand life, we have to take peace in knowing that John died a happy man, he made an impact, and above all, he understood life.  In the crazy madness of our everyday lives, we need to take the time to find happiness and our own understandings.

Don't be afraid to think different.  More often than not, the status quo SUCKS.