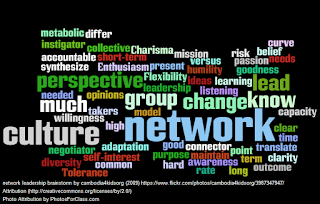 Many of us have different views on leadership - what exactly constitutes an effective leader?  How is this effectiveness measured?  Early in my career, my mentor told me that the school principal should be the first person on campus each morning and the last to leave.  Wow, tall marching orders.

As I became involved with the California League of Schools around 2006, a trustee with the league (Wendell Chun)  told me that school leadership is all about visibility.  This person, at the time, was Superintendent of the Oakdale Unified School District.  He told me that he visited each of his schools at least one day each week!  That is awesome.  Something I have never seen in a superintendent that I have worked with.  I decided to put Wendell's theory to the test when I was summer school principal in 2007.  I got to campus at least 45 minutes before anybody else.  Before school, I monitored the hallways, interacted with students and staff, and even walked the hallways during class time.  I was the last to leave.  As the summer session drew to a close, many staff members thanked me for the leadership and support they felt they had received rom me.  It was exhausting, but I took that experience with me to Carlmont High School, where I was a vice principal for six years.

As I look at school leadership now, I think visibility extends beyond the physical element.  I think it is important for the leaders to establish a positive digital footprint for themselves and for their schools.  Principals and superintendents should be blogging as a means to communicate all the events and great things taking place at their work site; Twitter and Facebook can be used to promote and celebrate the successes of the institution.  But even beyond that, if leaders really do have this type of digital footprint, they are understanding the power of a positive digital network that increases the learning space - walls are broken down and the audience becomes global, not just local.  The potential to be a model leader and model school is not out of reach.  I follow strong and respected leaders on Twitter like Todd Whitaker, Jason Markey, Jon Corippo, Mike Lawrence, Alice Keeler, and many more.  These leaders aren't afraid to push the envelope for student success.  They are also willing to share their experiences and successes, both publicly and privately.

Leadership will continue to evolve.  But one element is a constant:  LEAD BY EXAMPLE.
Posted by Unknown at 3:45 PM