Monday, June 27 was a true highlight of my life.  I was able to complete a "bucket list" item - visiting the beaches of Normandy - the site of the largest land, air, and sea attack in the history of war, known to us as D-Day.

Prior to arriving at the Memorial Center at Caen, I felt myself overwhelmed with emotion.  I've seen Saving Private Ryan and Band of Brothers.  I've read many of Stephen Ambrose's books on the subject, most notably D-Day: June 6, 1944.  Still, visiting the Memorial Center, strolling around Pointe Du Hoc and Omaha Beach, and browsing through the American Cemetery is nearly indescribable.

When the United States entered the war, we only had 190,000 active members in our armed forces.  We were not ready to go to war.  The training and preparation required for the attack in France to open a western front was intense.  Pointe Du Hoc was one of the first places of the Allies focus, as the guns located there were able to reach both Omaha and Utah Beaches.  The mountains that the Army Rangers had to scale were enormous.  To actually sit in a German "pill box" and see the vantage point they had puts things in a whole new perspective.  I wonder how anybody survived. 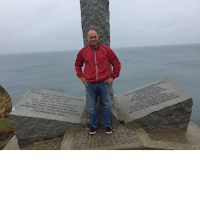 Omaha Beach, one of the deadliest and bloodiest areas, is absolutely beautiful and peaceful.  The sand is clean; houses are on the near mountainside that once housed German fortifications.  Looking at it today, it's hard to imagine the total warfare that took place there.  It's hard to imagine metal obstacles along the beaches, land mines, and dead Allied soldiers everywhere.  Many accounts of the event claim that there was so much death, parts of the water turned red.

The American Cemetery is a solemn and absolutely beautiful place; a fitting tribute to our fallen.   It overlooks Omaha Beach.   Viewing the tombstones of nearly 9,000 fallen individuals is humbling; each stone represents a story - a son, father, brother, friend - a life lost - mostly at a very early age.  "They sacrificed their tomorrow so we can have today." 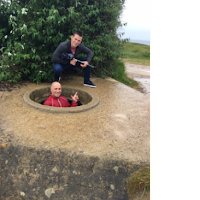 Much like the Holocaust Museum in Washington, DC, everybody should visit the museum/memorial in Caen and the beaches in Normandy.  To understand the present day, we must understand and learn about the past.

Warfare and technology has evolved tremendously.  While I know warfare today is not like it was for the soldiers of World War II, I often wonder if today's generation could answer the call the way the "Greatest Generation" did.  I truly do not think there will ever be another generation like the men and women who brought us victory and liberated Europe (and defeated Japan).  Our world has changed so much and has gotten more complex. This is not to suggest that the Greatest Generation did not have its own challenges, but they came together during a crucial time in our nation's history and saved democracy. 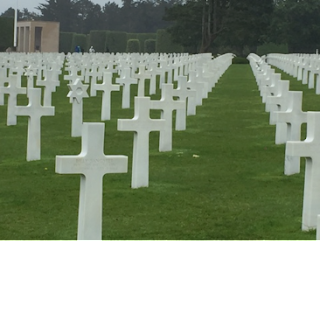