As we left Florence, Italy during Spring Break, we asked our tour guide to stop at the American Cemetery in Florence.  Lisa and I had been there with students in 2015, but none of the adults on our current tour, nor our tour guide, had ever visited the cemetery.


There's something about a cemetery, especially a military cemetery, that creates a quiet, reflective mood among people.  It doesn't matter what type of excitement or chatter may have been transpiring on the tour bus, the mood becomes serious - even somber - as we enter these places.

Unlike 2015, we had a docent provide us with some very important information about the cemetery and the entire Italian campaign during World War 2.  I never realized that Rome surrendered to the Allies on June 5, 1944 - the day before D-Day.  It seems to me that, like many other historical events, this sacrifices of the men and women fighting in Italy was overshadowed by the Allied invasion of Normandy on June 6, 1944.

Our docent was wonderful - a fantastic young man from New York who works for the American Battle Monuments Commission.  He was well prepared.  His review of the battle maps was fantastic.  (I didn't know that both South Africa and Brazil sent troops to fight with the Allies, did you?)  We learned a lot about the missing soldiers who's names are engraved along a wall.  Remains of WW2 era soldiers are still being found and identified to this day! 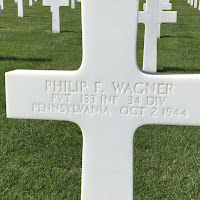 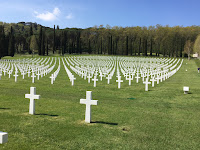 Probably the most moving piece of this visit for me was the final words from our docent.  He said, "Each of these tombstones is a person - a story.  They loved baseball, candy, playing in the streets.  They were sons, daughters, brothers, fathers, husbands, and wives.  As you walk along the graves, please say 'thank you' to the fallen soldiers.  It may be the first time they have ever heard this."  This alone changed my entire visit.  I found myself reading every name I could, and then saying (aloud), "Private Wagner from Pennsylvania: thank you for your service and sacrifice."  This made the whole thing more real to me.  I am inspired.  I want to learn more and honor these fallen.  This hallowed ground must be preserved forever.
Posted by Unknown at 2:34 PM